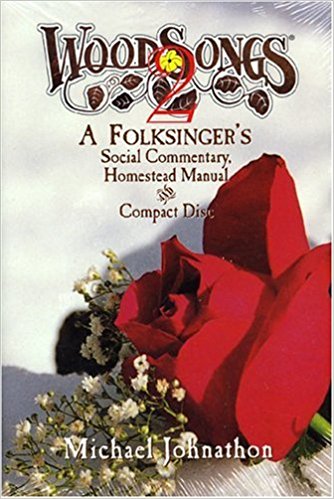 I really enjoy Michael Johnathon’s style. He tells great stories, both about his own life as well as others, and I find his perspective very encouraging and entertaining. I only wish more people would read this book (and the first volume of Woodsongs), especially those interested in creating art simply for the love of it. Both the Woodsongs books bring the issue of creating and enjoying art away from the celebrity status of today as he encourages folks to just create the art they love. But it’s more than music; he’s also trying to get people to reconnect with real life again: real food, real relationships, taking time to do things that matter, growing gardens, getting back to simpler things, etc., etc. At least that’s what I take from his writing. It just makes me want to take it easy and get out of the race. This is excellent rainy day reading. Get in a comfy chair with a hot cup of coffee and you’ll not be able to put this one down till it’s finished.

“I think that we’ll agree, the past is over” (President George W. Bush).

So those are the whimsical epigrams on the title page, right before the table of contents for this whimsical second version of the book by folksinger/treehugger/live TV-and-radio-show host (and I guess book author), Michael Johnathon. Great set-up, huh?

So what do you get here? A kinda laidback Introduction – followed by as farmhouse breakfast recipe –mm-mm – followed by the music and lyrics for “Winter’s Eve” – from the CD Homestead, tucked in the back cover of the book, in a nice little sealed envelope – and then a kindovan essay-story about “The Artist” (and why some of them spozedly but not really suck – for want of a better word) – and why this is tied into the creation of the weekly “Woodsongs Old-Time Music Hour” – and then the words plus music for “Homestead” – title song from the CD – plus a ref to the triad of songs in “The Homestead Suite” – you’ll run into it later – as representing morning, the waking hours, then sunset. There are quotes from Teddy Roosevelt and from Henry David Thoreau – one of Michael’s favorite authors – sprinkled in here too, by the way.

And here’s another little essay-story, “The Bells of Cold November,” about where stories come from, including the somber story of how the death of John F Kennedy was announced to the world by Michael Kilduff, at Parkland Memorial Hospital in Dallas Texas, that faraway day when our world was changed – and what would you change if you could? And that leads into the words and music for the song “The Bells of Cold November,” on the CD. And you start seeing what you’re getting.

It’s a very laidback, cool, series of liner-notes in book form – plus – is what it is. Oh my.

Trust Michael. He came out of what was, to most people, nowhere – out in the boonies, recording old people singing their songs, playing their fiddle tunes Within five years he had this entire syndicated radio show/record company with monthly samplers of indie musicians (plus his own CD’s), plus these books, plus he’s also in the middle of encouraging people to start up their own local coffeehouses, offering to connect them to the fine musicians who appear, being interviewed and playing their music, on his TV show, Internet-broadcast-live, down in Lexington, Kentucky. Whew.

It’s an amazing display of energy, which I can’t recall seeing matched anywhere else in the folkie world. Oh – if you run a folk-n-bluegrass radio show anywhere in the known world, sooner or later, Michael’s guys will find you, and offer you the chance to play his syndicated show on your station (at WESS, I used to incorporate it inside my own program, “Roots & Wings,” and just sit back to be amused – and learn something – each week from Michael’s expert but open-ended interviews, with everyone from Dr Ralph Stanley to Alison Krauss, Kate Rusby to the Fairfield Four, the live audience joining in, and I still recall the time he got some sweet old lady up from the audience, for a public service announcement having to do with making sure you don’t break your G-string by making it too tight – the audience was in stitches by the time he got thro, and Michael thanked her for being such a good sport).

Well, no need to look for liner notes for the new CD, featuring Michael with “The Folkboy Orchestra,” plus friends like Sam Bush, Ronnie McCoury, JD Crowe, Rob Ickes, John Cowan, Michael Cleveland, JP Pennington, Don Rigsby and Homer Ledford. Here they are. And oh yes – for a special sub-class of readers – there’s a handy little one-page “Folk Dj’s On-Air Sanity Guide (or “Stuff to do whilst the record is a-playin’”). I can guarantee you I know a couple of people who’re going to be reading this and saying, “Gee, I didn’t know Michael Johnathon was one of us!” Are you kidding? But of course he was.