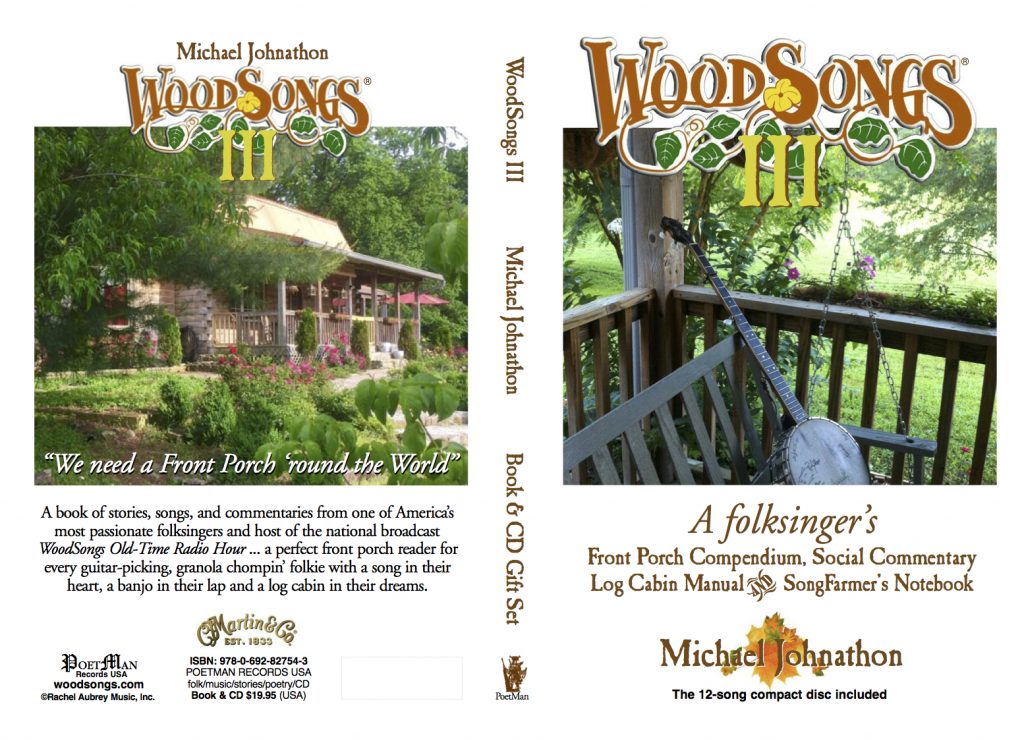 For anybody who has enjoyed the WoodSongs Old-Time Radio Hour, folk singer Michael Johnathon is no stranger. In his most recent project, WoodSongs III, Michael opens up and the reader gets an insight into who he is and where he’s been, where he’s going and his ideas on how to make the music world a better place for up and coming musicians.

From his log cabin front porch to the global media, he has proven again and again that it is the desire and dedication to get something done that leads to success. After all, “how hard can it be?” From building bridges to writing complete operas, the answer is often, “quite difficult” but never “impossible.”

Banjo or guitar, the songwriter faithfully keeps moving forward. Often emulating, but never copying, the ways of his early neighbor and friend, Pete Seeger, the goal is one of love. Love of performing. Love of having friends over fans. Love of the arts. Love of being an individual. Love of family. Love of freedom. And, love of Free.

WoodSongs III has several messages and themes in its various chapters. While tied together in this volume, they are quite separable. The benefits and rewards of Free and the illness of an entire industry built on the love of money rather than just love.

This is more than just a social commentary on his view of the world, specifically, the music world. It is, in fact, multiple commentaries bound within a single volume. This is a collection on everything from “the pig”, the unlimited dimensions of the arts, making dreams come real, what’s in a name, the performance rights organizations (PROs), non-protest protest songs, Banjos, and Guns. One can love it all. After all, “how hard can it be?” While “pretty ding dang hard”, the answer is always a positive one that is never impossible.

Because of the breadth of the topics covered under the WoodSongs III umbrella, the reader not only gets to know Johnathon better, the reader gets a glimpse into how to make the world a better place. Johnathon finds solutions to problems, whatever they may be. He manages to straddle the rail between critic or complainer to that of an innovator or a Mr. Fixit. He doesn’t really complain about the woes of the industry he loves but, rather, just gives us ideas on how to make it even better. He doesn’t dwell on its ills but, rather, on the vaccines that will keep the industry healthy and not let it get ill in the first place. He doesn’t try and get rid of what has been going on for decades but, rather shines a light on where the growth may want to venture. He looks forward, not back, making this book is a refreshing vision to the future.

Folksongs frequently are protest songs. In WoodSongs III we get some positive protesting with the focus on allowing the arts to be free. A kind of Recipe Book, music business insider Michael Johnathon shows us how to cook up and serve free as it pertains to music. Free to the venues. Free to where artists can perform. Free to where the music can be heard and experienced. Free to open new doors and sprouting new roots. Free to be exposed to the world. Advocating for free brings rewards. Creating positive and financial rewards. It is the consummate Win-Win situation where the artist, fans & friends, PROs, everybody wins.

The importance of the Front Porch in music is reinforced here. Other artists and authors have commented on this repeatedly over the years and Michael expresses why it is so important today. This book offers a variety of insights into the music business and presents a unique view of at least one direction that may save it from itself. Anybody interested in music from front porches, garage bands to successful Grammy winners will find something to think about here. Grab a copy, read the words, listen to the music, read the lyrics and consume WoodSongs III. You won’t go away hungry.

AVAILABLE ON THE MERCH PAGE